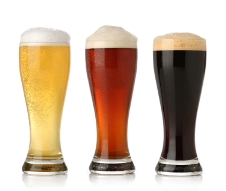 This week I take a look at different ways to carbonate your home brewed beer. Carbonation is an important feature of beer – it adds moutfeel, perceived body, and heavily influences the way that hop and malt aromas are delivered to your nose. It is also critical to the beer’s appearance and head retention.

Not all beer is carbonated to the same level. At one extreme we have real English ales that are served with almost no added carbonation. At the other extreme we have beers like the German Weizen that are so highly carbonated that the glass is often poured in stages to give it time to settle before more beer is added.

Most brewers start by bottling. While all of the cleaning, bottling and capping can be a chore, it is nice to be able to give away a six pack to a friend or take a few bottles to a party. There are a wide variety of methods you can use to carbonate your beer when bottling. All of these are added after fermentation and just before you bottle your beer.

Kegs offer some significant advantages over bottles. Not only does pulling your beer from your own tap have a “cool factor” to it, but cleaning and filling kegs takes only a fraction of the time it would take to bottle the same amount of beer. You also have a variety of ways to carbonate your keg.

As I mentioned above, you typically choose a target carbonation level, expressed in volumes, before you carbonate your beer. If you don’t know where to start, a level of around 2.4-2.6 is typical for an American ale. For bottling, you can use the carbonation tool or integrated calculator within a recipe in BeerSmith to estimate the amount of sugar or DME needed. For kegging, BeerSmith will also calculate the pressure level needed to achieve a given carbonation level. There are a number of online tools and spreadsheets that can do the same thing.

When using the bottling calculation, you need to enter the temperature of the beer at bottling time (which is often room temperature) as this is used to calculate the amount of residual CO2 left in the beer from fermentation.