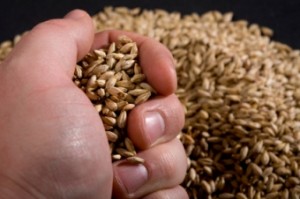 Decoction mashing is a great way to enhance the flavor and clarity of your all grain beer recipes, and requires only minimal additional equipment and time. Few homebrewers use decoction mashing in their recipes, but it is a very powerful technique for enhancing many styles of beer. This week we’re going to demystify decoction mashing so you can add it to your arsenal of homebrewing tools.

Decoction mashing involves nothing more than extracting a fraction of your mash mixture and bringing that portion to a boil in a separate vessel. Then the boiling wort is added back to the original wort to raise the temperature of the entire mixture for the next mash step. All that is required is a separate smaller pot and heat source.

Decoction mashing predates common use of the thermometer. In those early days, it was difficult to achieve accurate infusion temperatures for today’s infusion mash, and also malts were undermodified compared to the highly modified malt we have today. Brewers instead discovered by trial and error that if they extracted a fixed fraction of the mash and boiled it they could achieve the accurate temperature steps needed to mash their malts.

Decoction was used extensitvely in continental European recipes, and is still heavily used in many German and Bohemian styles. Many commercial brewers today use decoction mashing as well because it results in higher extraction rates and also maximum extraction of flavor from the malt.

Why use Decoction Mashing

The first thing most all grain brewers learn is that they should not overheat their mash or they will risk killing off the enzymes needed to convert sugars, effectively stopping conversion. Yet in a strange paradox, decoction mashing actually results in higher conversion rates than infusion mashing. In fact, decoction mashing has a number of benefits (Ref: FAQ):

At the same time, some care must be taken while using the decoction method. Decoction does take longer than a single infusion mash. When heating the decocted fraction, you need to monitor it to avoid scorching the mash. Safety is a concern when handling large quantities of hot wort, and you must be careful not to splash the wort to avoid hot side aeration.

All decoction mashes start with a single infusion step where hot water is added to the mash to start the mashing process. Typical temperatures for the first step vary. Multiple step decoctions are often used. Some examples of steps include:

The amount of water used in a decoction can vary tremendously. Traditional infusion mashes and many modern decoction methods use a relatively thick ratio of 1.25-1.5 quarts per pound of grain. Older decoction mash profiles often used much higher water to grain ratios – as high as 2 or even 3 quarts per pound of grain. Slightly higher conversion rates are possible at the lower ratios, but some purists still use the higher traditional ratios to reduce the chance of scorching. You also need to consider what will fit in your mash tun and boil pot.

The initial strike water is calculated as if it was a normal infusion, and can be done using the BeerSmith strike temperature tool or an online calculator. Typically the first infusion targets either 95F (an acid rest) or 127F (a protein rest).

After the infusion step, a fraction of the mash is decocted (drawn) and put in a separate pot to be slowly heated to a boil. Some people argue whether the thin part of the mash or thick part should be drawn. I generally try to get a representative sample of the mash, including both grains and wort.

Calculating the fraction of the mash to decoct can be easily done. A program like BeerSmith has both a separate tool for calculating decoctions and an integrated mash profile system that lets you simply select a decoction mash profile and automatically calculates the fractions and provides step by step mashing instructions.

Alternately, a quick google search will provide you with online decoction calculators. If you prefer doing it by hand, this article recommends the following fraction:

Where f is the fraction, TS is the target step temperature, TI is the initial (current) temperature, TB is the temperature of the boiling mash and X is an equipment dependent parameter (typically 18F or 10C).

Care must be taken when boiling the mash to avoid scorching. Mix the mash continuously and heat it gently. Once the decoction starts to boil you can add it back to the original mash and mix thoroughly to achieve the next step. Hold each step for the recommended time, much as you would with any infusion mash and continue with additional decoctions or sparging.

Finally, if you are using a decoction to achieve mash out temperature (usually around 178F target temperature), you need to draw only the liquid portion of the mash as mashing out with a large portion of grains can result in undesirable flavors.

comments and from BeerSmith