Olive Oil Instead of Aeration for Beer Brewing 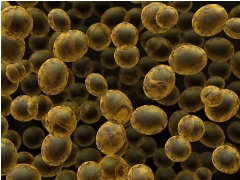 Aerating your wort with oxygen after the boil to promote a healthy fermentation is standard practice in the brewing industry. However, over the last ten years a small group of commercial and home brewers have been pioneering an alternative – olive oil!

When I first heard of the idea of adding a tiny amount of olive oil to your wort (or starter) as a substitute for aeration, I thought it was a joke. However, the technique which was pioneered in some detail by graduate student Grady Hull at New Belgium, has merit and is an interesting alternative to traditional aeration.

The traditional approach to a healthy fermentation is to add oxygen to your wort after the boil (typically 8-9 ppm), but before fermentation. Yeast requires oxygen to produce sterols and Unsaturated Fatty Acids (UFAs). These UFAs are needed by the yeast cells to form cell walls during fermentation, and if not enough oxygen is present the yeast can’t produce enough sterols and UFAs needed for healthy cells. This can result in high ester producetion as well as other off flavors.

But what if we could skip aeration entirely and instead provide the UFA’s directly to the yeast? This would have the advantage of avoiding oxygen entirely – which could improve the long term stability of the finished beer. In the hours between when oxygen is added and the yeast consumes during the lag phase it you actually do get some pre-cursors to staling flavors formed – so adding UFAs would avoid this.

Olive Oil as an Alternative

Grady Hull selected olive oil as his UFA addition, because it is cheap and easily available as an alternative to aeration. He tried several doses, but the best performing was an olive oil addition of approximately 1 mg per 25 billion yeast cells. This would correspond to an addition of approximately 4mg of olive oil for 100 billion cells, which is what an average White Labs or Wyeast package contains. The oil in this case was added directly to the yeast starter before it was pitched in the wort.

Obviously olive oil is not a perfect solution. Adding lipids has the potential to affect head retention of the beer – though adding such a small amount (roughly 4 mg for 100 billion yeast cells, which corresponds roughly to a 5 gallon (19 liter) batch) was found to have no affect on head retention.

In Hull’s experiments on commercial size batches he found a slightly higher level of ester (fruity) production with olive versus the control batch using conventional aeration, as well as a slightly slower fermentation. However, fermentation did complete and the ester production was found to be well within limits for the ales brewed.

While not a cure-all, olive oil does provide an interesting alternative to aerating your wort. Particularly for beers where slightly higher ester production would not impact the overall flavor profile, olive oil may provide better long term flavor stability than traditional aeration.

Olive oil should be used in very small quantities tied to the amount of yeast used to avoid potentially negative effects on head retention, as excessive oils will hurt head retention. Hull tested it to 1 mg per 25 billion cells, which works out to 4-6 mg for a typical 5 gal (19 liter) home brewed ale. I’m certain as more brewers experiment with olive oil, we’ll learn more about usage rates and effects.

more: Should you put olive oil in your homebrew?