The Craft of Cider Making 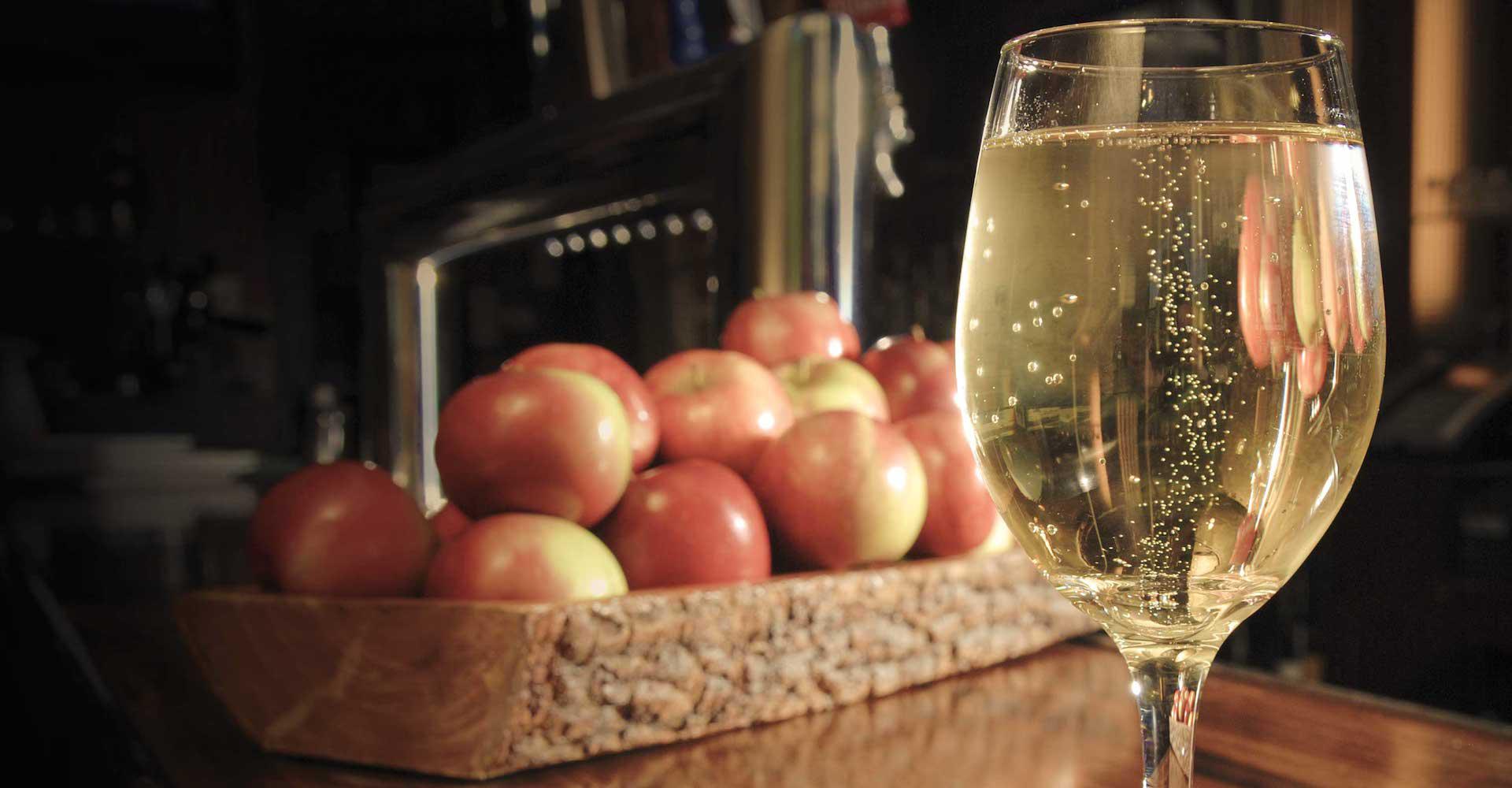 America’s cider makers are experiencing a revival akin to the craft-beer revolution: invoking old-world, traditional styles while also innovating and experimenting. Hard cider is tapping into the beer and wine markets as well as the gluten-free trend, and it is developing an identity of its own. It’s an exciting time to be drinking and learning about cider, and it’s as good a time as any to start making your own at home.

Brian Rutzen, known as “Cider Brian,” has turned a passion for cider into a career and made it his goal to “grow the size of the cider-drinking public in Chicago.” He wears many hats: he is the Chicago sales ambassador for Uncle John’s Cider Mill, the cider director of the new cider-focused bar The Northman, a cider broker who connects cider producers and importers with local distribution teams; and he has been making cider at home for seven years.

As Rutzen says, the first distinction to make between beer and cider is simply that cider is not beer; cider is fermented not brewed, and making cider is much more similar, in process, to wine making. “Cider makers are really only listening to the apples and trying to find out what the cider wants to become based on the blend of apples that they are using. You can’t impose your will on cider the way beer brewers impose their will on beer because the beer brewer has complete control over everything,” says Rutzen. “[Cider makers] are at the mercy of what Mother Nature has given them, and even if they use the same apple crop every year, that crop changes based on sugar levels, acidity, everything.”

How the apples express themselves and the decisions the cider maker makes before, during, and after fermentation can produce a full range of flavors and expressions, from sweet to dry, clean to funky, smooth to prickly and bubbly.

“The blend really dictates what we do as cider makers, so we’re really confined, but that’s where the creativity comes in. You can only do so much, so to make your own stamp, you have to work within those confines and really try to create something exciting for people,” says Rutzen.

Within those categories, the styles are broad and developed from geographic origins.

Common cider is made from culinary or crab apples and can showcase a range of flavors and aromas, from sweet or low alcohol cider with some apple aroma to dry ciders with more wine-like esters.

English ciders are made primarily from cider apple varieties—bittersweet (low in acid and high in tannin) and bittersharp (high in acid and tannin). These ciders fall on the drier end of the spectrum and are higher in alcohol. Some English cider makers may let the cider sit in oak barrels and undergo wild yeast fermentation, which can produce a barnyard funk and earthy, grassy elements, and sometimes even smoky or bacon flavors.

“French-style cider [also made from cider apple varieties] tends to be a little sweeter and more champagne-like,” says Rutzen, and can involve a process called keeving, which produces a naturally sweet cider by stopping fermentation before the cider reaches dryness. French-style ciders also tend to be subtler, less acidic, and lower in alcohol.

Spanish-style ciders can be very acetic and tart. (“It’s close to vinegar, but it’s not vinegar; it’s a little bit on the intense side,” says Rutzen.) Also known as sidra, Spanish-style ciders may feature a wild yeast strain and are still rather than sparkling.

Finally, New England ciders have a bold apple character and may be brewed with adjuncts such as white and brown sugars, molasses, honey, and raisins. Sometimes, they are barrel-aged.

Then there are fruit ciders (apple ciders finished with other fruits or fresh juice), German-style apple wine (which is sweeter, higher in alcohol, and tends to express itself as a wine), andcysers (which are made with honey and judged as a mead because the sugar content comes from the honey, not juice).

Yet, as Rutzen says, cider styles can be difficult because they are not always representative of the regions and a geographic label can be too broad.

“Not all French cider is done in the same way, and New England-style cider . . . everyone who makes cider in New England bristles at that because they don’t make cider according to that style,” he says.

While the labels are useful to understand the general traditions, cider makers and drinkers can also refer to ciders as they taste and classify dry to sweet. Then they can talk about adjuncts included, whether it is fruits added at the end or added spices such as cinnamon, ginger, or vanilla.

A Series of Choices

Overall, says Rutzen, cider making is less about following a recipe than it is about making a series of choices: the blend of juice, the strain of yeast, whether to increase sugar levels and what type of sugar to use, when to rack the cider into a new vessel and how many times to rack it. But while there are a lot of choices, it’s not a high-stakes situation. “There’s not a right way or a wrong way. It’s what you like and the choices you make,” he says.

There are possible missteps, such as an infection by the bacteria acetobacter, which can turn cider into vinegar, and cleanliness throughout the process is still of the utmost importance, but there is no one dogma of cider making, says Rutzen.

“Just like in life, every choice has its consequences. Make a choice, live with that choice, and take notes on how you would change your process next time.”

If you homebrew already, you probably already have the basic equipment to make cider as well: a white food-grade plastic 5-gallon bucket, a 5-gallon glass carboy, and an airlock.

It is possible to crush and press your own apples, but it requires a significant investment in equipment. (Rutzen’s homebrew club uses a woodchipper to crush the apples and an apple press from the 1860s.) It also requires a significant volume of apples—about three bushels of apples produce five gallons of juice. It would take quite a few hours to crush three bushels in a food processor and juice them yourself. If you are committed, some orchard owners will press your apples for you for a fee.

Rutzen recommends that you buy fresh juice straight from the source—from a local grower or at the farmer’s market. Check to make sure that the juice doesn’t have any preservatives and isn’t pasteurized, which can take out a lot of interesting components of cider. UV light-treated (cold-pasteurized) cider is fine, however.

You can use champagne or white wine yeast, or any kind of ale yeast, depending on what you want from your finished cider and how long you’re willing to wait. Champagne or wine yeast will ferment out for about one and half to two months or up to four months or more, at 55–65°F (12–18°C). A cider fermented with ale yeast can take from three weeks to a month at 65–72°F (18–22°C).

Before pitching the yeast, you need to decide whether you want to sterilize the juice or leave any wild yeast and bacteria that may be in the juice. Rutzen prefers to sterilize the juice to let the commercial yeast strain completely take hold, so he adds one or two crushed Campden tablets (potassium or sodium metabisulfite) to the juice before fermentation to prevent any growth of wild yeast and bacteria. (Don’t boil the cider to sterilize it. Boiling causes the pectin to set, which creates a hazy beverage.) After adding the tablets, he lets the juice sit for twenty-four to thirty-six hours before pitching the yeast.

To ensure healthy fermentation, Rutzen suggests that you measure the sugar and pH levels of the juice. For original gravity, Rutzen aims for 1.050 and above to get a good, strong alcohol character and to aid in preservation, longevity, and body. You can also add different forms of sweetener: honey, white table sugar, or glucose for a stronger cider.

Finally, as the last step before pitching the yeast, you can add pectic enzyme (about ½ teaspoon per gallon), which helps clarify the finished cider by breaking down the pectin in the apple juice.

The first phase of fermentation will take about seven to ten days. After you pitch the yeast, you need to let it sit for a day or two, watching for fermentation activity through change in appearances (a bit messy with brown sludge coming to the top) and airlock activity. After a few days of fermentation, you can add yeast nutrients and keep the yeast in suspension by aerating it (gently swirling the fermentation bucket or stirring with a sanitized racking cane every now and then). At the beginning of primary fermentation, the airlock will bubble every five to ten seconds, while at the end of primary fermentation it will bubble a few times a minute. When fermentation slows, let the yeast and sediment settle to the bottom of the bucket for about a week and then rack the cider to a glass carboy.

The secondary phase of fermentation, which helps to clarify and develop the cider, can take from one to two weeks up to two months, depending on the yeast you use and how sweet or dry you want your cider. For final gravity, Rutzen seeks 1.005 and below. Sweeter ciders require stopping fermentation so not all the sugars are consumed. You can do that by cold crashing it (chilling the cider down to the point where the yeast goes dormant and drops to the bottom) or adding Campden tablets or sulfites, which also help with stability and preservative effects over the long haul. You can also back-sweeten it by adding concentrate or sugar after stopping fermentation.

If you want sparkling cider, you add priming sugar before bottling and let it age and condition in the bottle for two to three weeks. If you prefer still cider (no carbonation), you bottle the cider without adding any priming sugar, and you can consume it right away or let it age for a few weeks to see whether it develops any interesting character.

Then drink and enjoy!

Cider, Hard and Sweet: History, Traditions, and Making Your Own, 2nd edition, by Ben Watson (The Countryman Press, 2009).

This entry was posted in beer and tagged cider, cider styles. Bookmark the permalink.