Parti-Gyle brewing is a method for making more than one batch of beer from a single all grain mash. It offers tremendous flexibility since you can brew two beers of different gravities, and also add different hops and yeast to create distinct beers from one brewing session. 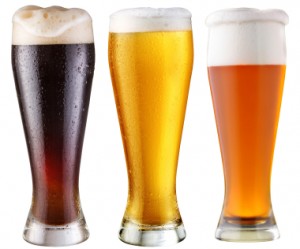 Parti-Gyle brewing is not a new method. The method goes back hundreds of years, and many modern sub-styles are examples of light and heavy versions made from a single mash. Examples include the various weights of English and Scotch Ale, various grades of Bock, and even variations of Trappist ales. In the 1700’s and 1800’s it was very common to create a strong beer from the first runnings of the mash and a lighter common beer from the second runnings of a mash.

The standard method for Parti-Gyle brewing is to make two beers from a single mash. Typically a fairly high gravity beer is made from the “first runnings” of the mash, and the second runnings are boiled separately to make a lighter beer. Often different hop additions, boil additions and yeast are used to create distinct styles from the two runnings depending on the brewer’s preference.

Estimating the Gravity of Each Beer

When designing a parti-gyle beer, one is usually concerned with gravity and color of the two beers being created. This is important for determining how much grain is required for each beer and also how much liquid to run through each to achieve a target boil gravity. The rule of thumb for an average mash is that 2/3 of the gravity potential is in the first 1/2 of the runnings. This is due to the fact that most of the high gravity wort comes in the first third of the lauter.

To perform these calculations yourself, start with the OG estimate of the mash runnings using conventional methods. This can be done using the method described here, except you use the mash efficiency and total lauter volume instead of the overall brewhouse efficiency and overall batch volume to get your mash OG estimate.

Once you have the OG estimate for the overall batch, get the number of points by subtracting one and multiplying by 1000, so 1.060 becomes 60 points. Next we use the following to calculate the final number of points in this fraction:

The second runnings of 2/3 is:

Using the same equation, you can come up with an accurate estimate for the gravity of each of the runnings based on the original gravity of the overall batch.

It should be no surprise that the color of the two batches in a parti-gyle will be darker for the first runnings and lighter for the second in most cases. Calculating the actual color for a regular beer is described here, and is based on the Malt Color Units (MCUs) which are simply the sum of the pounds of malt times their color for all grains in a batch.

Looking at the examples above – a 50-50 volume split has about 2/3 of the gravity in the first runnings and 1/3 in the second runnings. The malt color units follow, so about 2/3 of the MCUs will be in the first running and 1/3 in the second. So if you calculate the overall Malt Color Units for the total batch (sum of the pounds of malt times color of each malt), you can multiply it by 2/3 or 1/3 for each running and then apply the Morey equation to get the color estimate for each of the runnings. Here the OG_FRACTION refers to the 2/3-1/3 OG split so you would apply 2/3 to the first runnings and 1/3 to the second:

Since the Morey equation is not linear, you will see a larger color difference for a parti-gyle beer when working with lighter beers. So for a very light beer and a 50-50 volume split, the first runnings will be almost twice as dark as the second runnings. However as the beer gets darker the difference will be smaller – to the point where the second runnings of a Stout beer might have no perceivable difference in color from the first.

Once you have mashed your parti-gyle beer and taken the two runnings, the rest of the brewing process is the same as with any other beer. Obviously the two runnings are boiled separately so you either need two boil pots and heat sources or a sterile way to store one of the runnings for a few hours while you boil the other.

One of the great features of part-gyle brewing is the ability to change the character of the beer in the boil and fermentation. By adding different hop additions, yeast, spices or steeping additional grains prior to the boil (much like an extract brew) you can dramatically change the character of the two beers produced. With a little imagination you really can create two distinctly different beer styles from a single brewing session.

For design purposes it is usually best to treat the two runnings as separate beers at this point, and the usual rules for estimating bitterness, final gravity and fermentation apply. The design possibilities are nearly endless. You could create a strong ale and bitter, a wheat bock and weizen, a brown and pale and many other combinations from a single mash.

I hope you enjoyed this week’s article and decide to make your own parti-gyle brew in the future. Thanks for dropping by, and please subscribe to my blog or podcast for more great articles and sessions on brewing beer.

This entry was posted in beer and tagged beer, estimating, gravity, homebrew, parti-gyle. Bookmark the permalink.